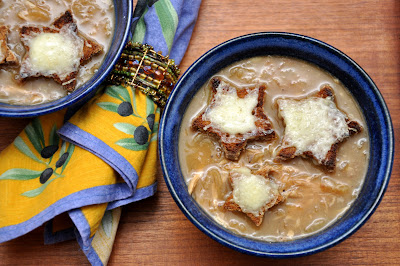 Cold, snow, ice. I had a whole day to cook, because I sure wasn’t going out in that stuff. I needed to go to the market, though, because we didn’t have much in the way of fresh fruit or veggies. But I decided that tomorrow is another day (as they say where I come from).

So I looked in the fridge, and I had a chicken carcass from one I had roasted a couple of days before. By now, Dan is well trained to put the bones back in the dish so that I can use them to make stock. I had the complete chicken in there. If the paleontologists come, they can create a replica of a chicken from these bones. Well, minus the head. And the feet.

Where was I? Oh, yes, trying to find something warming to cook. What I really wanted was a big steaming bowl of dark, rich onion soup, complete with a toasted crouton and melted cheese oozing over it. The problem was that I had no beef stock. All I had was chicken. And some onions. And some bread. And some cheese. Hmmm...(if I had had a beard I would have stroked it here)...I thought, can I make onion soup without beef stock? Can I make it with chicken stock? Well, of course I CAN, but will it be any good?

The answer is an unequivocal YES. I made the chicken stock and then made the onion soup in the normal way, but substituted white wine for the red and chicken stock for the beef stock. Not the traditional way, but it was really really good. The flavor was lighter, with a different kind of depth than the traditional soup. I’ll make it again. Because the color and the flavor were lighter than the traditional onion soup, I called it “white”. Also because “chicken onion soup” would have sounded like the onion was a coward, which wasn’t true. At least I don’t think so.

Because I had time on my hands while I waited for the onions to brown slo-oo-owly, I made some fancy pants croutons. That was almost as much fun as the soup, and I think that they made the soup taste better.

This is not expensive food, but it is food for someone who has time to spend with it, since a large part of the flavor depends on the quality of your stock. You can use canned stock if you need to--it’ll still be good, I think. I don’t see why you couldn’t even use vegetable stock for a vegetarian version, which would be even lighter. But there’s no hurrying the onions--they need to cook long and slow to develop their flavor.

I thought this would make more, but in the end it was enough for just two. 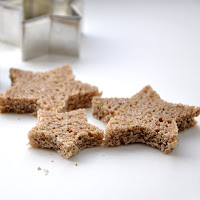 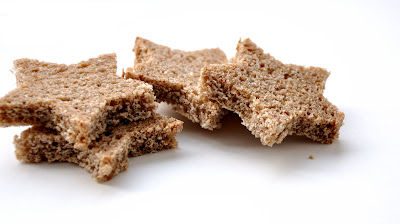 Posted by Kate at Serendipity at 9:15 AM

I recently discovered your blog and I love the way you write - makes me smile! Plus, I love your 'fancy pants croutons' =)

Soup looks wonderful!
I signed up for your app. Pictures are wonderful. Good job.

I am all over those fancy pants croutons! I have some heart cookie cutters that would be perfect for Valentines day!

I'm sure the soup is delicious..but I LOVE the stars!

Hi Kate,
Your cowardly chicken soup sounds & looks delicious. You may be onto something here, mon ami!
Maggie

Those cheesy stars are so adorable! Must use them!

This looks so delicious. I almost always make this with chicken stock.

I love the star croutons! How perfect for a cold, starry night :) The soup sounds wonderful too - one of my favorites.

I found your blog through Monique...a lovely blog, lovely recipes and photots and great ideas, like cutting these breads into stars for your onion soup!
Ronelle

This looks like just the thing for a cold winters day...
Love the stars...and I know I would love the soup!

Oh that sounds awesome. I've actually never had onion soup, it's been on The List for ages.

This looks absolutely perfect for a cold day! I laughed out loud at the "chicken onion soup" line. The croutons are adorable, I'll have to remember that idea.

That soup looks so good. I am going to make it this week. Oh, and how did you get your husband to move to Germany with you? Or did he get you to do it? Amazing either way-mine would NEVER go for it... Sounds wonderful. Stella

Hi Kate!
Yes, the trick to onion soup is the long, slow cooking of the onions - till they come out like caramel almost. I deglaze mine with some port or sherry, and I use a home-made beef stock made before as the beef bones take up to 7 hours of simmering to extract the oh-so valuable marrow. Love your blog!

a star is born!

Oh, oh, yum ....
So, I have some Vidalia onions (my fave!) lying around, and I bet they would be just perfect for this. Great idea, and way to think outside the box!!

Oh how I wish I could eat onion soup, Kate. I am always so tempted and then am sorry. But it is my sister's favorite soup so I will copy and send your recipe to her! What lovely photos!

Love the stars......and love the soup too

Just happened upon your blog and I love it. I definitely don't venture out in the cold freezing weather either and love coming up with great dishes on days like that. I love your fancy pants croutons and your pictures are wonderful!

I don't know if you saw my Cooking Escapes post when I wrote about the chicken stock I made as soon as I unpacked my pots. (I took the chicken part down because someone complained about the "raw" chicken) Anyway, I made a "killer" chicken stock if I do say so myself. And gallons of it!!! I used the chopped up vegetables for a cream of vegetable soup. The shredded chicken was tossed onto a bed of beautiful Romaine and topped with a fruity creamy citrus dressing and that stock, well that stock will now blossom as Serendipity White Onion Soup!

Thanks Kate, it looks heavenly:)

Oh Kate, that would be so perfect on this chilly, damp day. It looks delicious and I hope to try it soon. Thank you for sharing the recipe. (Love your 'fancy pants' croutons!) xo ~m

Mmm, this is my most favorite soup. I love the star-shaped croutons.

And thanks for your tips on my chicken roulade. They were all great.

Oh, how I wish I had a bowl of that onion soup right now. Thanks for sharing this recipe and this beautiful post. Love the star shaped croutons. Great idea! ~ Sarah

Your soup looks wonderful & ooh so tasty too!

I could use a big old bowl of this right now. Love the fancy schmancy croutons!

The soup sounds wonderfully creative, but the stars...the stars....they have to go on top!

The stars make it so adorable! And it sounds super tasty!