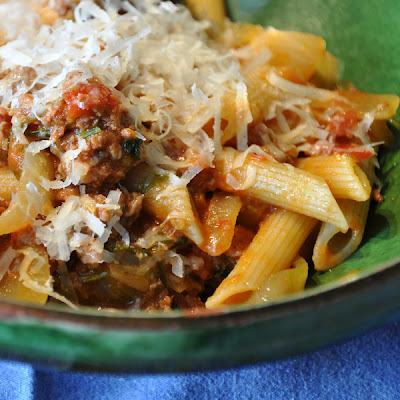 Sometimes you just want something quick. Something filling. Something comforting. At our house, that usually means pasta. The other day it was (still) snowing out, and I wanted something warm and comforting. Something a little spicy. Something that would make me think of warm climates while it fended off the cold snowy weather. Which is still here, by the way.

I had some merguez sausage and that seemed to be the perfect thing. Before we moved here, I didn’t know this spicy lamb sausage from Morocco. I was really missing something special! They’re used a lot here in Belgium, and we love them. They’re a traditional accompaniment to couscous and often grilled as a part of a mixed grill.

So, lemesee, it was snowing, which meant I had to use what was in the house, 'cause I don't drive in snow. I had merguez. I had some winter tomatoes (I know, but what can you do?), I had some onions. Pasta. Rice. And I had a bunch of fresh tarragon, which was making my kitchen smell like a corner of heaven.

So I used one one onion, two tomatoes and the three merguez to make a sauce--1-2-3 sauce! I wanted something else to add to it, and I didn’t know what I had. I was having a hard time thinking, because the tarragon smelled so good. What could I add--rosemary? No, not right with the merguez spices. Waht else did I have--basil? No, not in the hot sauce. Cilantro? Ew. And all the time I was smelling this lovely, elegant tarragon. Hmmm...

I had grave doubts about adding tarragon to merguez. Merguez has a gutsy, in-your-face spicy flavor, and tarragon always seems to me to be restrained, elegant, in-the-background. But I kept smelling it, and it seemed as if it might work. So I did what I always do when I’m not sure about adding a fresh herb to a sauce. I bit off a tiny bit of the herb and took a good whiff of the sauce at the same time.

You know what? Tarragon, that delicate ladylike perfume in sauce béarnaise, is a pretty gutsy flavor when it’s fresh. It has a strong, licorice flavor that goes PERFECTLY with merguez. I think I may have discovered a new culinary marriage-made-in-heaven, to rank up there with basil and tomato. Or chocolate and raspberry. Tarragon and merguez. It’s amazing. One day I'll be famous. I'll still be me, though. You know, humble. Yeah, that's it.

Did I mention that this is another pasta sauce that can be made in the time that it takes the pasta to cook? My favorite kind of meal! I should also tell you that these photos are of Dan’s plate. I ate mine over rice. As I was writing about the hummus flower and the days when I couldn’t eat wheat, I started to remember how I felt before I stopped eating wheat--tired, achey, bloated, headachey, insomniac, fuzzy-headed, and other-things-you-don’t-really-want-to-know-about. And I realized that I’ve been feeling that way again. So I’ve started avoiding wheat for a while to see if I might feel better. It’s early days yet, but I’ll let you know how it goes. 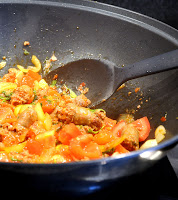 Posted by Kate at Serendipity at 3:19 PM

this looks DELICIOUS.
i love merguez.

We truly enjoy sausages combined with pasta.. I bet on the rice it was good too..Hope you are feeling better..it really has that much of an effect..My niece cannot eat wheat..
It looks good Kate~

Pasta is comfort food around here, too. Last snowstorm I made a HUGE bowl of pasta and watched "Breakfast at Tiffany's" on TV....on the couch...under a blanket! Come Spring!

This sausage looks wonderful in the sauce...and I'm sure it was great on rice...do you like the no wheat whole grain pastas?

Kate this looks wonderful and very comforting! It is not always easy to find merguez sausage here...I must look around for a better source!
My husband is off to Brussels for a month on Tuesday...I am sure he will be glad to hear there is snow just like home....NOT...we had 4 pretty inches last night and a bigger storm coming on Friday night....

Looks great. I love dinners that come together like this--seeing what you have and what you're in the mood for. Perfect!

Thanks for the comments. It's now the third day and I'm feeling better. Not sure whether to be glad about that or not--wheat is in a lot of things I love. I'll stick with it and see how it goes...

Diane, I havent' tried the no-wheat pastas. I'll have to start looking for them.

Linda, Brussels doesn't have snow right now, I think. Only rain. We're up higher, in the Ardennes, and if it snows in Belgium, it's on us. I have to say, though, that I prefer it to drizzle!

Thanks for stopping by. And double thanks for leaving a comment. I LOVE comments!

Kate, Great minds think alike. I also made pasta last night, last 2 nights actually. We had snow, cold weather and pasta was the perfect meal. We dined in front of the fireplace ans watched the snow come down.
I love merguez and have tried tracking down a purveyor.
The pasta sounds wonderful. The pic looks great too!
Hope your "no wheat" diet will have you feeling better in a jiffy!
Pam

Did you say spicy lamb sausage? Where can I get this wonderful thing in the States?! The pasta sounds great, tarragon is one of my favorite herbs.

I have seen recipes using merguez, but I didn't know that it was a spicy lamb sausage. It sounds absolutely delicious and I love how you named the meal 1-2-3 pasta!

Merguez is a Moroccan sausage, and you might try looking in a moroccan or north african market. Or maybe a place that serves couscous might be able to point you in the right direction. It's worth a little effort to track down, I think! It's really wonderful.

Oh my goodness Merguez!!! Mmmm. After Eid we went to the halal market out in Methuen, MA and my husband bought some. He said this is Merguez, you don't know anything about this. :0) (He's from Mauritania) He cooked it, served it and it was love at first bite. My mother came up from Philly this past December and she brought some Merguez with her, mmm, mmm, mmm again. We still have some in the freezer because we're trying to eat it in moderation. Well after seeing this post looks like we'll be having this for dinner.

Ayanna, thanks. A halal butcher should also have merguez. That's where I get it her in Belgium--at a halal butcher.

I really must stop reading food blogs before dinner - my desk ends up a slobbering mess!

I think sausage in any pasta sauce is amazing. Never heard of merguez before, must keep an eye out for it!

I hadn't heard of merguez sausage either but followed your link and I see that it is popular in Belgium. It sounds wonderful and combined with pasta it must have tasted delicious!

This is great...I actually bought some spicy sausage at the store yesterday, some nice tomato sauce, and made some simply pasta similar to this. I agree that, especially lately for whatever reason (for me anyway) it's nice to a satisfying, simple meal. THanks for sharing!

This looks great Kate! I also love merguez and it's not easy to find here though we have a couple of pounds in the freezer right now - when we see it, we buy it in bulk! We love adding it to pasta sauce too!

This looks great Kate! I also love merguez and it's not easy to find here though we have a couple of pounds in the freezer right now - when we see it, we buy it in bulk! We love adding it to pasta sauce too!

although i have no idea what tarragon tastes or smells like, i have no doubts that i'd dig this. i mean, come on--it's spicy sausage and pasta. that, in any combination, equals comfort.

Hahaha ...! This is such a fun post! I enjoyed reading it!

As much as I love to learn about Belgian culture from my Flemish boss, I doubt I could ever! LOL! He's very particular about professionalism ... of how not to go across the boundaries. Oh, well ...

The pasta dish looks good! I bet my boss would miss Merguez a lot! LOL! He's from Tienen!

Kate, you have the most delightful style of writing! And 1, 2, 3 pasta sounds right up my alley. Super yum!

It doesn't only look great, it also tastes great. Thank you for sharing.

I came on your blog googling specifically for a pasta recipe with merguez, and really love your humourful way of writing. I'll be back...

i hope you enjoy your life here in Belgium.