Sunday morning Dan and I got up bright and early and took the train to Amsterdam. Dan had a meeting there and I had free time. I had arranged to meet up with Oz, from Kitchen Butterfly and to spend the afternoon with her exploring Amsterdam. 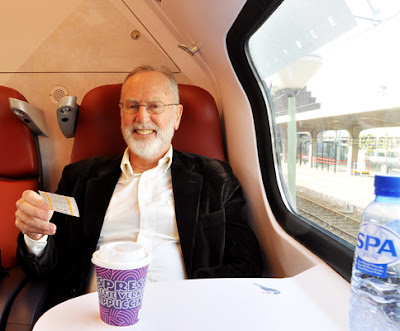 The train ride up there was really interesting--we passed a lot of pastures with canals around them instead of fences. From some angles it looked like the animals were running free. The Dutch are experts at water management. Since a large part of the northern Netherlands is below sea level, they have to be! 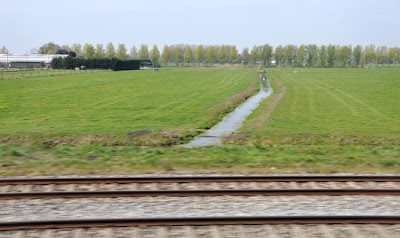 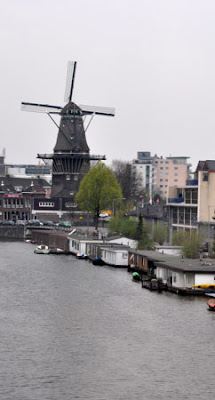 We met up with Oz, and Dan went off to his meeting. Oz and I found a cup of tea and began telling our life stories... 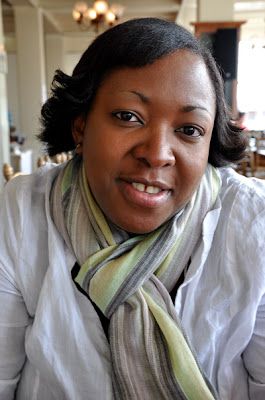 ...and continued as we walked around snapping pictures. 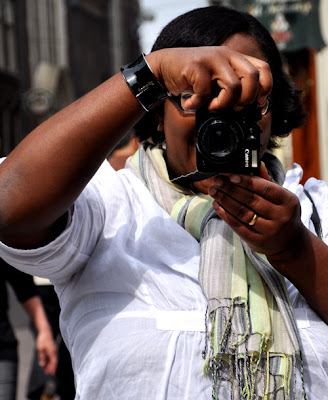 Amsterdam to me is all about water and darling houses. 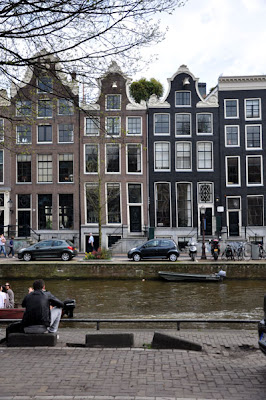 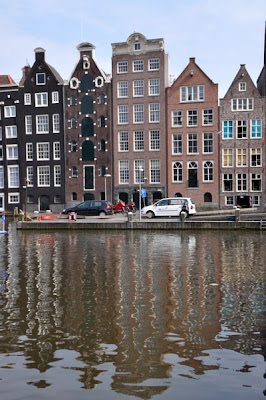 There was a kayak race on one of the canals. 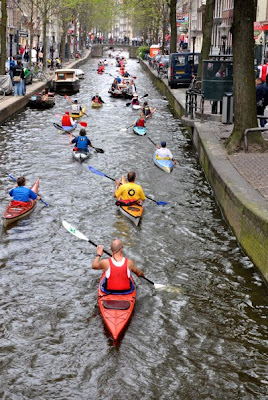 And it wouldn’t be Amsterdam without the headshops. I love this photo of the family on the bicycle in front of the head shop. New shipments of ‘hemp’ had apparently been received, and business was brisk. 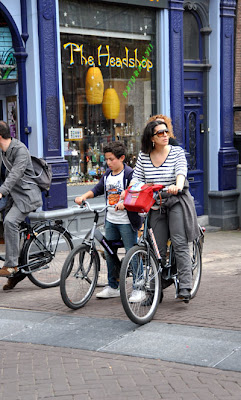 We took a walk through the narrow streets, heading for the Old Church. We passed some colorful shops, one of which specialized in ...ahem....protective appliances, shall we say. In all sizes. I don't want to think about how they measure for them... 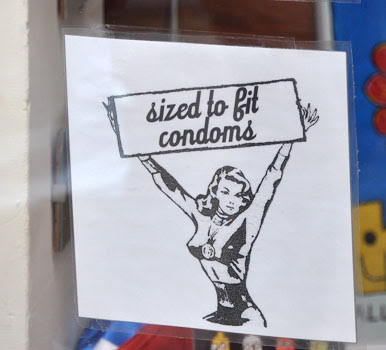 LOL, there was a couple taking photos of the merchandise in the window and their daughter, about 3, asked “Mama, what’s that?” I wanted to stick around and hear the answer, but I didn’t.

As we made our way toward the old church... 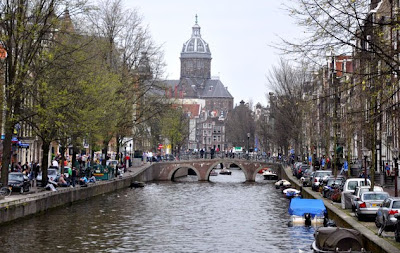 ...we ducked down a very narrow passage. It was full of shops, and they all had large windows. Most of the windows were covered with curtains, but in a few the curtains were opened, and there were women inside, wearing bikinis and, um, sort of dancing. One of the windows was open, and the woman was leaning out and, um, dancing, towards some guys. I was carrying my big honking Nikon, but I was holding it by the lens and my hand was up by my shoulder to make it clear I wasn’t using it. When the woman in the open window saw my camera, she shouted, “Oh NO. NO. NO CAMERAS. GET THAT OUT OF HERE.” I held it up over my head and shouted back, “NOT using it! NOT using it!”. We kept walking. So I’m sorry to say that there are no photos of the Amsterdam dancers. Ahem. Sorry.

At the old church there is a statue commemorating the working girls of Amsterdam. 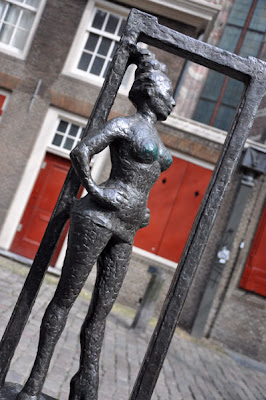 But there’s a lot more to Amsterdam than the red light district. There's the Anne Frank House. There is the Beguinage. There's the Dam. And there are macarons, of course. There are narrow, charming streets. There are more darling houses. 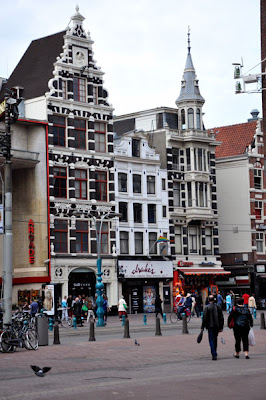 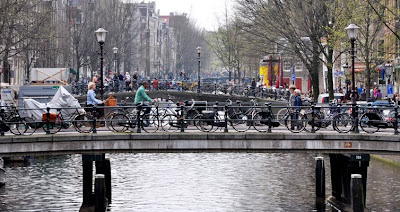 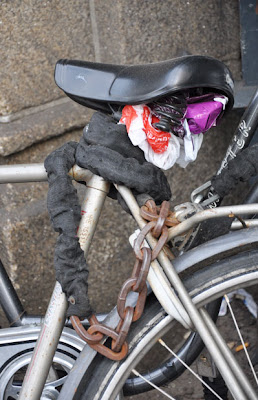 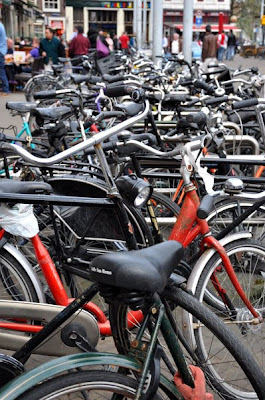 There are interesting contrasts--here between the shop and the name of the alley...

There are tourist shops. This one was our favorite. He liked us too.

He promised low prices, although we know that the Euro didn’t exist in 1992, so that can’t be right... 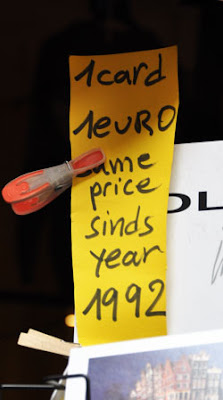 We walked a lot, we saw a lot--yes, we got an eyeful! We missed a lot, too, because it was Sunday and a none of the markets were open. We didn't get to the Anne Frank House or the Beguinage. The Dam is under scaffolding right now, and there's a Ferris wheel in front of it. The amazing museums--the Rijksmuseum and the Van Gogh museum--we decided to save for another day. We had adventures enough for one day! But the best part of the day for me was meeting Oz. 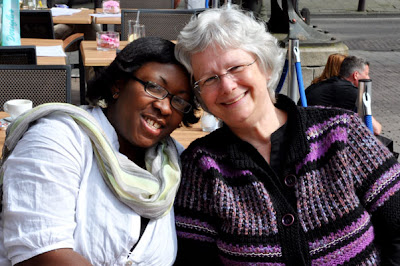 Posted by Kate at Serendipity at 7:28 PM

Such cute photos! I've always wanted to visit the Netherlands, but haven't yet had the chance. I'm living vicariously through these blog posts :)

Oh Kate, I don't know where to begin:beautiful photography, want to go to Amsterdam now, jealous of Oz, and you look like such a sweet lady in that last photo! Oz does too... Hey, I want a be a sweet lady in Amsterdam!

What a lovely day you had!
Thank you for sharing it with all of us!
L~xo

What a lovely day trip Kate! Your photos are gorgeous and I love the storefronts, the canals, and the homes - what a beautiful city!

What a great trip! I love seeing Amersterdam through your lens!

Nothing like an open-minded city - LOL! It is a beautiful place and the architecture is enchanting. How nice that you got to meet Oz and share such a fun time exploring the city.

I had a superb day and looking forward to our next meet! Love to Dan and stay well dear X X X

Waht a lovely daytrip! I hope to visit someday soon.

What an amazing day - and some lovely photos to preserve the memory. Thanks for sharing!

What beautiful pictures--I felt as though I were there! I can't wait to visit Amsterdam again someday.

I was there twice and loved it and found everything but the macarons - DARN. Looks like you had a wonderful day.
:)
Valerie

I've only been to Amsterdam once but I loved every minute of it. The art there is amazing!

What fun for you to meet Oz, Kate. Isn't it nice to put faces and personalities to the blogger names?
Looks like you had a marvelous time.

Hello Kate! For what it's worth, I've hit you with an award... see Spice Garden post for 4/29/10 for a full explanation ... and stay at this blog thing! You are very good at it!

Looks & sounds as if you had a wonderful day in Amsterdam. Some years ago I spent a long weekend there with my friend Ann, we walked for miles then took a little boat tour to rest our weary bones.
Didn't see any dancing ladies though, we missed that treat!!
Cute pic of you & Oz.
~Maggie~

I have been in Amsterdam. Your pictures are wonderful. I didn't take too many pictures then so yours are a real treat.

What a wonderful day. I haven't been to Amerstdam in almos....30 years. After seeing your pics, I have to go back,
Van Gogh!
Pam

It's always fun to read someone elses account of a place that is so close to where I live and where we go so often that we sometimes forget to really see it anymore. Love the photos Kate!

I also love Amsterdam!! that's lovely that you met with Ozoz!

Lovely pictures also from you 2!