Fish with Leeks and Tomatoes

We're still traveling, and won't be home for a couple of weeks. Here's a recipe from the archives to keep you busy and happy till we get back. Bon Appetit! 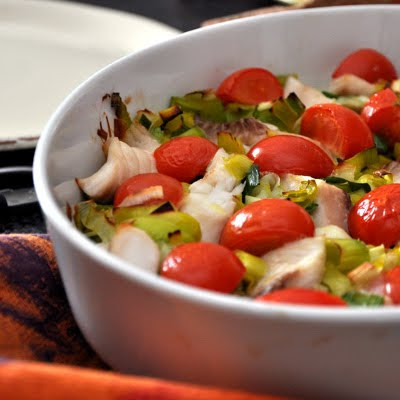 Growing up in an Irish Catholic family meant that we ate fish on friday. Every friday, without fail.
Actually, as Catholics, we weren’t obliged to eat fish. We just couldn’t eat meat. At our house, though, 'no meat' meant fish. So we ate fish every Friday. We didn’t live especially close to the sea (Atlanta), and the selection of fresh fish at that time wasn’t great. We were also a large family (Irish Catholic, remember?). All of this meant that we ate a lot of the dreaded Tuna Noodle Casserole. With potato chips on top. No peas. We also ate a lot of salmon patties made from canned salmon. I still like these. I haven’t made them in a long time, though. Hmmm....
Because we didn’t live near the sea, the fish we ate was most often canned. Tuna and Salmon. Sometimes frozen, from the kitchen of our friend Mrs. Paul. She always made her specialty for us, fingerfish, a species that must be extinct now. At least I hope so.
In the summer, it was different, because we could go to the beach (St. Simon’s Island). At the beach we ate fish. Crabs. Shrimp. Lobster. All of it. We loved it. Somehow, though, we didn’t eat fresh fish at home. In later years, my parents used to bring home frozen shrimp and crabs. They waited till I had left home to do that. I’m not bitter, though.
All this meant that I didn’t have a big taste for fresh fish. Shrimp, yes, but not fish. I didn’t know anything about them either. I liked to order trout in restaurants because I loved eating the flesh on one side and then unzipping the backbone to get at the other side. I still like to do that.
It was only when we moved to Belgium that I began to seriously cook and love fresh fish. Here, we are close enough to the sea to have fresh fish readily available. Everyone has their favorite fish market. For some, it’s in nearby Soumagne. For others, it’s in Herve. Or even the supermarket. My friend Françoise swears by the fish monger who’s in the town of Ensival for its weekly market. Me, I shop around.
I’ve developed a taste for fish. We still associate it with Fridays, but we eat it other days of the week as well. I find myself in the strange position of knowing the names of my favorite fish in French but not necessarily in English. Some of them have names that are not so pretty in English--rouget, for example, is mullet in English. Makes me think of a bad hair style...
Where was I? Oh, yes. We try to buy fish that’s sustainable and relatively local. This usually means tilapia or plaice or pollack or cod from Iceland. My favorite fish is the trout caught by one of our friends. He doesn’t really like to eat it, so he and his wife freeze it and sometimes they give it to us. YUM!
This dish is one that I first made one night when we were going out of town and we had some leeks and tomatoes in the fridge. And some fish. You can use any firm-fleshed white fish for this. It’s veryvery easy, and the flavors are delicate and healthy and clean--tomatoes, leeks and of course the fish. I serve it to company. On Fridays, of course!

Posted by Kate at Serendipity at 1:41 PM

What a nice and easy recipe and perfect for our fish days, which are often at our house. Enjoy your travels.
Sam

Yummmmm...this looks so fresh, colorful, and delicious! Just how I love my fish....cooked simply! I think I will prepare this, this week!
Thanks my friend! Xo